*Disclaimer: This list is not an official list and is not in collaboration with TKA. This is just a book blogger/writer making life easier for you to get inside agents’ heads as I try and do the same.*

I love me some Twitter Pitch Contests, and #TKA20 was no exception! The Knight Agency (TKA) was established by Diedre Knight in 1996 and has had authors featured in New York Times, USA Today, Publishers Weekly, Los Angeles Times, to name a few.

If you have no idea what a Twitter Pitch Contest is, or why one should participate, I recommend you read this introductory post.

This agency is hot, and to celebrate their 20 year anniversary they have held their very first Twitter Pitch Contest! (Details from the agency’s website here.) I hope there will be more, because this is a great opportunity to consistently get a feel of what specific agents are looking for, and I know a lot of authors want to know what’s a hit or miss with TKA.

I’m changing up how I present Twitter Pitch results. Instead of just listing out all the favorited tweets I can find, I’m compiling the stats and a handful of pitches, keeping those shown here at 10 or less per agent. Of course this information is just by what I can unearth on Twitter and I know I’m going to be missing some tweets, so there’s that. But it takes me 2 days so hey, I saved you lots of time!

As always, I’ll still include my analysis of these winning pitches at the end. Hopefully this will be easier for you to understand your dream agents!

Did you get a favorite? Congratulations! Now, hold your horses. Expected response times were tweeted:

DeidreKnight ‏@DeidreKnight
@dk_dailey@KnightAgency We’ll all be jumping on these ASAP, but allow 6-8 weeks before following up. We shall be reading fiends. 🙂 #TKA20

I find this a very reasonable amount of reply time given the huge influx of queries they’re likely going to be dealing with. I queried TKA twice in 2015 and received a response within a week, so they’re definitely fast on the response time.

Total Fav’d Tweets Analyzed = 136 *Note: Deidre claims to have favorited 142 pitches, so I missed a few!*

And there was also a shocking and awesome+inspiring announcement from Deidra the day after the contest:

DeidreKnight ‏@DeidreKnight
One of the 142 just received an accepted an offer of representation! The first one I read. #TKA20@JenniferBolmer Congrats to @AuthorMAGrant

M.A. Grant ‏@AuthorMAGrant
The Unseelie prince has become a traitor to protect the world’s worst chosen one. All’s faerie in love and civil war. #TKA20#MM#PNR

Contrats to Grant!!!
Now the stats (Tweets include clickable links): 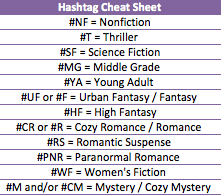 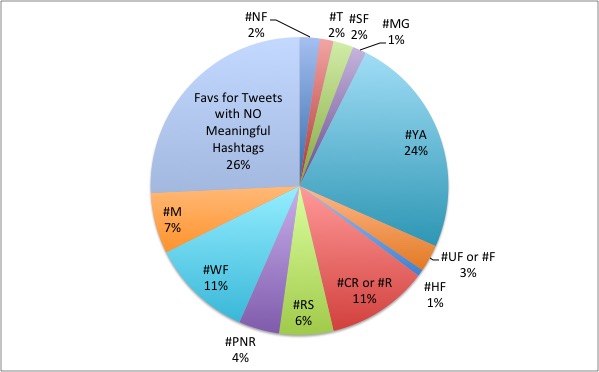 KL Cooper ‏@KLCequalsME
Alia didn’t think winged men existed, until she met one on a mission to save his people. Without her, their worlds will burn. #TKA20 #PNR

Pwale ‏@wordsofapwale
In a galaxy recovering from a devastating war, two girls find strength in each other. Queer love and mental health in space for YA #TKA20

His family kills monsters on TV, but at 17yo, he wants out. Siren knows a way, but only if he protects her from his parents #TKA20#YA#F

Megan McDonnell ‏@megmcdwrites
PAPER TOWNS meets IMAGINARY GIRLS when Lauren loses her sister on a semi-illegal trip to a creepy town under the lake. #TKA20 #YA

J.D. Lexx ‏@JDLexx
After a mystical diary gives an author power to blur fantasy and reality, she must help her own broken hero set both worlds right #TKA20 #RS

Alex Harrow ‏@dystophil
#LGBT Firefly with magic: an assassin has to take down the Empire that killed his friends and kidnapped the guy he loves. #TKA20 #A #SFF

Kelly Ethan ‏@Kellyethan
There’s an old saying that absolute power corrupts absolutely. But they got it wrong. It isn’t power that corrupts… Secrets do. #YA#TKA20

Melissa L Davis ‏@redcoatfollower
#tka20#HF Aristocratic Pagan revivalists threaten the monarchy of 18th C England. It is up to a Duke and his engineers to save the Empire.

Paula Gesmundo ‏@noapaulag
When Apollo saves a girl who got roofied, he doesn’t expect to fall for her. Or that she’s the pawn in the family game. #tka20#UF

Elissa Dickey ‏@ElissaDickey
#TKA20#WF TIME TRAVELER’S WIFE + THE STAND An asteroid. An apocalyptic Midwest. A mother who needs to find a way back to her family.

Kimberly Zook ‏@kimberlyzook
#TKA20#YA#SF In a world where male babies have ceased to be born, Ro fights to protect a secret baby boy from an evolved all-female race.

I’m really surprised how many tweets Diedra took on. That’s really amazing. And by already accepting a client the day following the Twitter event, she meant business! This is where Twitter Pitch Contests present a truly unique opportunity. Hosting a pitch contest, especially when it’s a first-ever for the agency means that there’s some “hunger” and you’re going to want to show up to the party with something delicious. Do you think Grant, the author who just got signed, would have queried this agency? Perhaps, but this contest brought an opportunity to spotlight the most important aspect of that manuscript to the agent, and that’s the pitch. If an agent likes a pitch, that’s a long ways to skipping the other irrelevant slush in their query pile, especially if you’ve gotten their attention, even briefly. Never underestimate opportunity.

That said, Diedre really surprised me not only by the volume of favorites she took on, but the variety as well. Her hashtag stats are all over the place, and she’s really open to more than I’d realized. But even if she was open, each pitch did have some elements in common. It was strong, of course, but it wasn’t high fantasy. From what I could tell, the pitches with fantasy or sci-fi had touches of Battlestar Galactica and/or mythological retellings. And pretty much all winning pitches seemed to have a romantic element.

This just enforces to me that if an author wants to go paranormal romance and still land an agent, it can’t be a same ‘ol trope of vampires and such, and even better, should be a fairytale retelling. At least, that’s what’s hot now, who knows what’s hot tomorrow.

Kate ‏@ElegantDiz
Bodies are stacking up, and I’m being blamed. Of COURSE I am, I’m the butler. I swear I didn’t do it. Except that one time… #TKA20#M#CM

Allison B. Hanson ‏@AllisonBHanson
He has one job; to keep the witness alive without falling in love with her. It’s about to become impossible. #RS#TKA20

betseyj1009 ‏@betsey100962
Amy fights her cheating husband, her memories, best friend & tween daughter to rediscover & save herself. Is she too obsessed? #TKA20#wf

Lauren Cahn ‏@YogaChickie
After her boss turns up strangled, Sloan finds comfort in the arms of a stranger – who knows more about the murder than he claims. #TKA20#M

Maggie McTiernan ‏@DearbhlaMcT
Police cvr-up her brother’s murder. Can she prove it before they frame her for a crime they don’t know she committed? #TKA20#M#WF

Jennifer Thurston ‏@NoYoMoCo
An Illuminati-type group will help 16yo Rosie harness her malfunctioning power…or so they say. Danger and romance included. #YA#TKA20

AJ Comments:
Janna also took on an impressive number of tweets, but definitely seemed to have a trend. She seemed to stick to romantic stories, and the more suspenseful the better. She also liked women’s fiction, young adult, and mysteries, and seems to also be looking for a sense of danger or thrills in them. 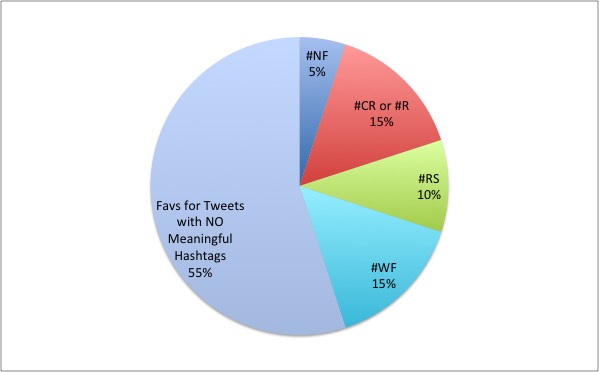 Claire B Goodbody ‏@clairebgoodbody
#TKA20 Step into New York in The Gilded Age 1909: Follow the mystery, romance and drama as Mary builds her design career and falls in love.

Judy McDonough ‏@JudyMcDonough
An unlikely hero dog rescues a suicidal man and teaches him the value of life by helping him save others, one paw at a time. #TKA20 #CR

JEM ‏@mamanchampagne
#TKA20 French champagne heiress must unravel her dead father’s past to reinvent her crumbling Champagne château to its former glory.

Anita Banks ‏@anitambanks
A southern woman in life/marriage crisis, how much forgiveness to give or expect, Journey of Grace Ann, Queen of Bad Decisions #wf #TKA20

Stephanie Queen ‏@StephanieQueen
Doctor in Chile rescues injured socialite during Quake while he’s hunted by corrupt General to save father–Socialite falls for both. #TKA20

LissaPWaters ‏@Lissa_Waters
When a female computer hacker stumbles across a straight-laced cold case agent’s suspect, she find herself the next target. #TKA20 #RS

AJ Comments:
Pamela was pretty consistent with romance and women’s fiction, with warm fuzzies as a big bonus. 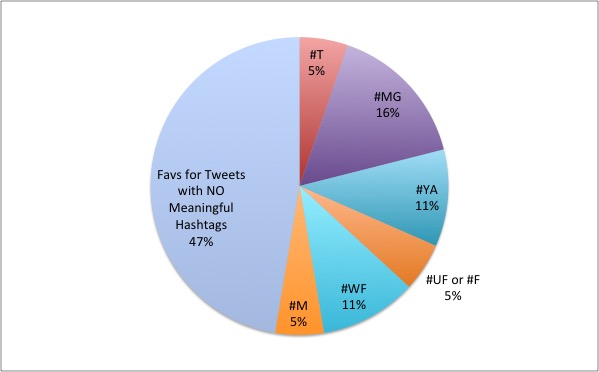 Claire Castillo ‏@IMhauntedClaire
#TKA20 When 21yr old Karma lands a birthday trip to Ireland, she discovers the Church’s cost to keep geneology secrets may include her life.

AvelynMoore ‏@AvelynTMoore
Thousands of bottles wash ashore off a Florida key. Residents scramble for bottles & contents, unaware of the danger within. #TKA20 #M

JC Hemphill ‏@JCHemphill
Single mom fights to protect youngest son from the outside world while older sister fights to save him from paranoid mom. #TKA20 #T

TheNotebookBlogairy ‏@NotebkBlogairy
Amagdalene slips thru time the 20’s, 60’s & modern day so she can save her gr8 gr8 granddaughter from repeating the past… #TKA20 #MC #WF

Robin Olson ‏@tweetolson
A therapy dog & therapist help MC heal her past as she helps a dad regain custody of 3kids after mom sets him up w/abuse charges. #TKA20 #WF

lavmelval ‏@LValiram
A dream holiday becomes a nightmare when customs find 4 kilos of cocaine in her bag. She is sentenced to death. She didn’t do it. #TKA20

Hetal Avanee ‏@HetalWrites
They made her run, made her hide, killed her parents, & kidnapped her sister. Asha’s in Mumbai to take back what’s hers. #TKA20#A#UF w/Rom

AJ Comments:
Travis was difficult for me to analyze, as I don’t really see a trend. If anything, he picked out interesting or unique fiction as long as it didn’t include magical or mystical elements.

Wendi ‏@iReadWriteSail
Aiden left the dust in Syria with PTSD. He & his alert dog are doing well until they find a woman’s body on shore of his Irish home. #TKA20

Amy Markstahler ‏@Ajmarkstahler
#TKA20 A southern Cinderella story. 17yo Elsie has a secret. Her moms too stressed to notice. Her dads ill & shes found love worth lying for

Elaine seemed to stick to feel-good and women’s fiction, even when presented as YA. Speaking of which, the first tweet I show here has both YA and WF hashtags, how does that work!? (Who cares, worked for the author, ha!) 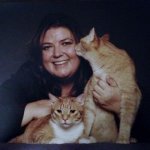 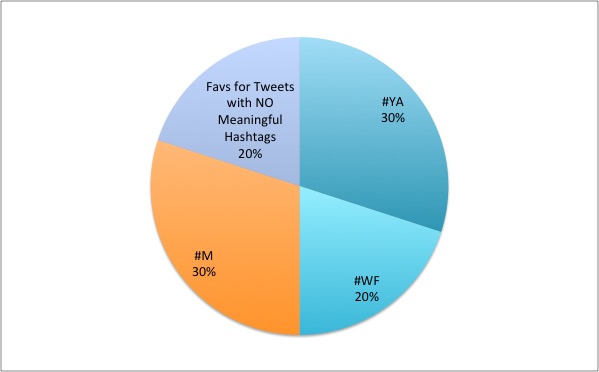 Melissa seemed consistent with stories which were flat-out mysteries, or had crime-solving elements. But I did love the one #F pitch she favorited which I think had more to do with its cute projection of voice and use of book comps more than anything (which is extremely impressive to squeeze into a single Tweet).

I really enjoyed analyzing these tweets and I feel I’ve learned a lot about The Knight Agency. They seem to lean towards cozy romances, mysteries, women’s fiction, and a dabble of sci-fi and fantasy elements if towards Diedra’s tastes. It’s great to know what an agency likes, and also those few genres they’ll accept if done right.

Did you like how this information was presented? What would you have liked to have seen differently? I plan on continuing to analyze Twitter Pitch Contests, if for just my own understanding of agencies and their interests and trends.

Happy writing, and congrats to all the winning pitches!