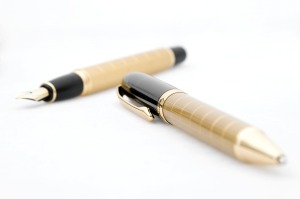 Multiple pen names are useful for famous authors, not so much the indie-writer.

Pen names can be useful when used appropriately and for the right reasons. As an established author with a powerful publishing house and paid publicists, pen names can be a powerful marketing tool. Readers will always know what they’re getting. 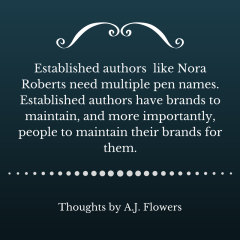 Let’s think of Nora Roberts; one immediately envisions a glossy cover displaying a dreamy male model with a petite woman swooning on his arm. Would you be surprised to learn that Nora Roberts is a pen name for a woman named Eleanor Marie Robertson who also writes under different aliases? She writes as J. D. Robb for the in Death series, and has also written under the pseudonyms Jill March and for publications in the U.K. as Sarah Hardesty.

The reason this is a good idea for someone as famous as Nora is because she has a brand. There are currently 209 romance novels attributed to the Nora Roberts’s name, and it would be out of place to have any other genre in there, or books that didn’t fit the mold of what readers have come to expect when they see “Nora.”

However, Nora has a team of professionals to maintain her personas. She has copywriters, content editors, marketing teams and publicists, etc. For an indie writer who has to “do it all,” having multiple pen names could be attractive on the surface, but ultimately detrimental.

The lesson here is that an indie writer already has a lot on his or her plate, and adding multiple personas to maintain is really spreading oneself too thin.

Too many pen names might be tough on an indie writer, but writing under a single pen name could be beneficial.

Having a pen name in and of itself is a good idea for some writers. There are plenty of studies that show male pen names have higher sales and agent interest, and I can understand women who would want to use a male pen name for this reason, such as the aforementioned Nora Roberts who decided to use the male pen name of “J.D. Robb” for her murder mystery series. (Male Pen Names: Wall street Journal Source and Huffington Post Source.)

A pen name can also be a great idea for anonymity, like George R.R. Martin wished he had done for himself before he became famous. (Source.) But having multiple aliases isn’t something I’d recommend for an indie author. Readers won’t be weirded out if you have multiple genres or books with different tones. Don’t forget that readers tend to get attached to characters and worlds more so than authors, and will keep coming back because they’re convinced you can give them a world they’ll enjoy reading about.